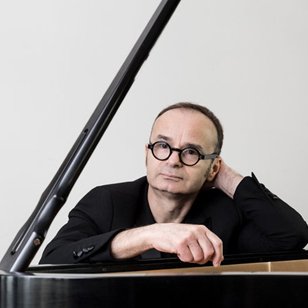 Acclaimed French-American pianist François Chouchan is a sensitive and generous artist whose beauty of sound, clarity of texture and integrity of interpretation have been highly praised. The “neo-romantic melodist” likes to consider himself as “an emissary of love.” Since the beginning of his career, Chouchan has been completely involved with his audience.

“Playing music is a true act of love,” he says. “The intimate relationship with the public is essential. During my performances, I invite people to embark with me for a unique inner journey. Opening my heart, I share my deep feelings and emotions with them. I become transparent, almost vulnerable. I narrate a story. Each note becomes a word and each melody a sentence. It is very intense, sensual and fusional.”

Chouchan has appeared in recitals, and with orchestras and chamber music ensembles on several continents. Instructed by Yvonne Loriod-Messiaen, Germaine Mounier and Jean Hubeau at the Conservatoire National Superieur de Musique de Paris, he was unanimously awarded first prize in Piano and Chamber Music. As the third prize winner of the prestigious Viotti International Piano Competition in Italy, he was invited to perform for several Masters, including Mstislav Rostropovich, Nikita Magaloff, Georgy Sebok and Magda Tagliaferro.

A Franz Schubert specialist, Chouchan exemplifies the beauty of the Austrian Master’s scores with his exquisite touch and richness of colors.
“I always had a very strong connection with Franz Schubert,” he says. “His spirit seems to be linked to my heart. His music transcends the time and centuries. It seems to me that Schubert used his music as a mirror, a therapy. Expressing his loneliness, pain and melancholy, his scores evoke his furtive hope, sadness, candor and disillusion. They talk about his contrition and resignation. His music is totally unique and divine.”

An active chamber music player, Chouchan likes to reintroduce and play forgotten scores written by wonderful Romantic and Neo-Romantic composers. “So many gems have been kept inside the drawers forever,” he says. “It is my goal and expectation to take them out. The world deserves to rediscover them.”

A creative person, Chouchan is also a composer of melodic soundtracks for films. He has also collaborated with different contemporary ballet companies, performing Schubert Cycle “Winterreise” for baritone and piano with two dancers as a world premiere.